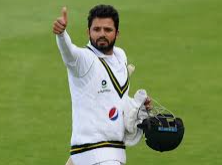 Azhar Ali is 5th in list of player who scored most hundred for Pakistan.

Azhar Ali is only player among these player who has average less than 45 all 4 players have average more than 50 in test cricket.