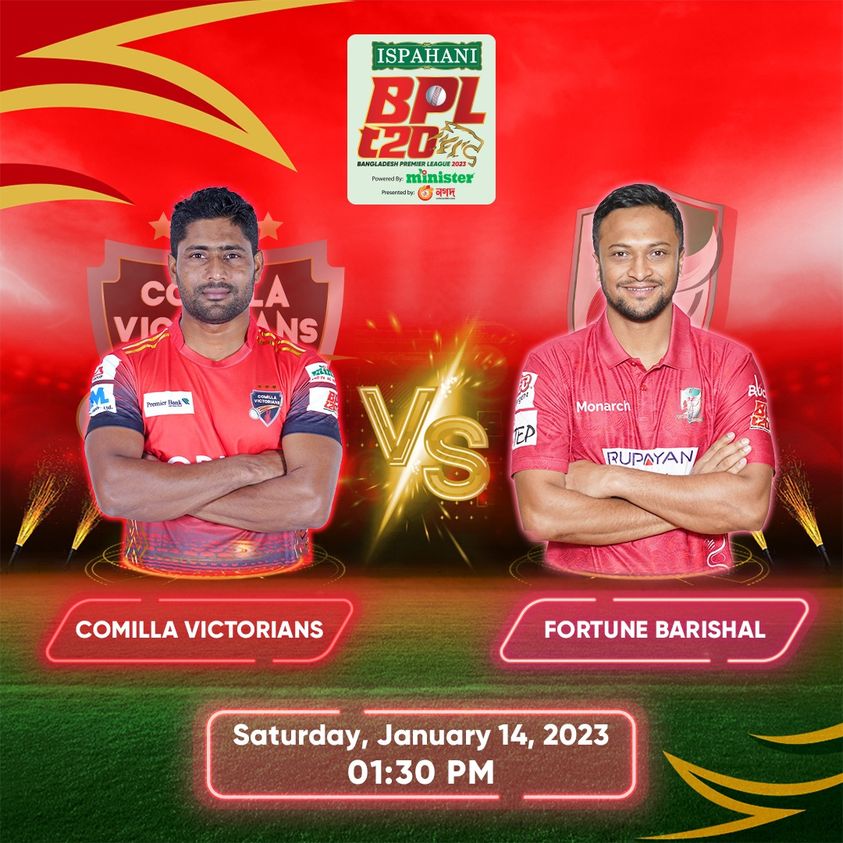 On Saturday, January 14th, Comilla Victorians will face off against Fortune Barishal in the 11th match of the Bangladesh Premier League 2023 at the Zahur Ahmed Chowdhury Stadium in Chattogram. Comilla Victorians have had a rough start to the tournament, losing both of their opening matches and currently sitting at the bottom of the standings. They were defeated by the Sylhet Strikers by five wickets in their last match while defending 149 runs and also lost against Rangpur Riders by 34 runs in their opening match.

Fortune Barishal, on the other hand, has been doing well, they beat the Chattogram Challengers in their last match by 26 runs and are currently in second place on the standings with two wins from their first three matches. The Pakistani batter Iftikhar Ahmed played a stellar innings of 57* off just 26 and Ibrahim Zadran scored 48 off 33 to help Barishal reach 202 runs. The team defended well, with captain Shakib Al Hasan delivering an economical spell which restricted the Challengers to only 176/4.

The pitch at the Zahur Ahmed Chowdhury Stadium in Chattogram is balanced, providing opportunities for both batsmen and bowlers. The average first innings score at the venue is 176. In their last match at this venue, Fortune Barishal scored 202 runs, indicating that another high-scoring match can be expected.

Dawid Malan, an experienced English batter, will likely be the best batter for Comilla Victorians. He recently scored 37 off 39 against the top-ranked Sylhet Strikers and 17 off 9 balls against Rangpur Riders in the opening match. He is expected to be a crucial player for the team throughout the season.

Shakib Al Hasan, a star Bangladeshi spin all-rounder, is expected to be the best bowler for his team. He has carried over his great form from last season, scoring 75 runs in two innings thus far. Even though he only scored eight runs in the last match against the Challengers, he was exceptional with the ball, taking one wicket and only giving up 27 runs in four overs.

Comilla Warriors has more chances of winning vs Fortune Barishal.

Disclaimer: This prediction is based on the understanding, analysis, and instinct of the author. While making your prediction, consider the points mentioned, and make your own decision.