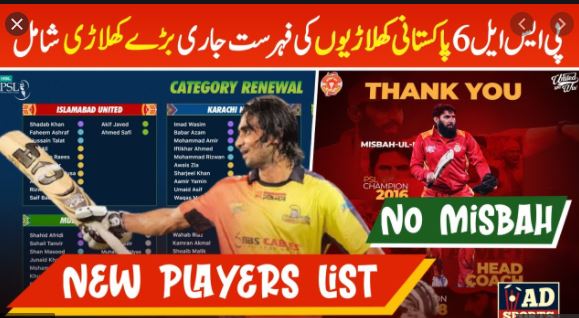 Lahore: The categories of local cricketers for HBL Pakistan Super League season 6 have been announced.

Pakistan Super League 2021 will once again be a showcase for Pakistan’s best talent. The categories of players participating in HBLPSL 2020 have been finalized. Pakistan captain Babar Azam, who scored 473 runs in 12 matches and was declared the best player of the recently concluded HBPSL 2020, is in the platinum category with his teammates Emad Wasim and Mohammad Amir in Karachi Kings.

Multan Sultan captain Shaun Masood has entered the diamond category after impressive performances in the HBLPSL 2020 and National T20 Cup. Shaun Masood’s teammates Shahid Afridi and Sohail Tanveer are in the platinum category.

Quetta Gladiators captain Sarfraz Ahmed is in the platinum category while fast bowler Mohammad Hasnain has moved from Gold to Diamond. He was the highest wicket-taker of Quetta Gladiators with 15 wickets in HBLPSL 2020.
Fakhr Zaman is in the Platinum category. He became the second highest run scorer for Lahore Qalandars in HBLPSL 2020 with 325 runs in 12 matches. His teammates Mohammad Hafeez and Shaheen Shah Afridi, the highest wicket-taker of HBLPSL 2020, are also in the same category.

Lahore Qalandars fast bowler Harris Rauf’s journey of success continues. He has joined the Diamond category from Gold. He has taken the most 57 wickets in 2020 with an average of 19.57. Now that the category revenue process and the pick order have been finalized, the way is now open for transfer and retention.

As a Renault Process, the votes of representatives of all franchises were required for each player. Teams were not allowed to vote for their players but were allowed to submit a review of the players at the end of the voting stage.

The list has been reviewed by Director High Performance Nadeem Khan and GM Commercial Imran Ahmed Khan who are leading player acquisitions from HBLPSL 2017. National team performances, domestic cricket performances, and brand value in the T20s were highlighted to finalize the categories of local players.

Director Commercial Babar Hamid: The launch of new categories of local players is an important step towards holding HBL Pakistan Super League season 2021. Renault has been managed with a view to infrastructure and a commendable approach aimed at providing equal opportunities to all players in good faith.

I am sure that like all the previous five seasons we have seen great performances by the local players this time too, which will give a lot of young players a chance to showcase their talent so that they can play internationally through HBLPSL. Be able to present yourself prominently on the surface. However, the Renault category will not be for players who were included in the playoffs for the HBLPSL Season 2020. These players will be part of the overall player pool available for selection in the Player Draft. نگے۔

All the players who have represented Pakistan in any format have been given Gold category.
An Under-23 player cannot be in the Emerging Player’s squad for more than two years, provided he has played three or fewer matches in those two years.

All teams can now submit player relegation requests before finalizing their retained players. When a request for relegation is made from anywhere, then the rest of the teams will be allowed to pick the player in his base category. If another team does not pick the player in its base category, then the player Will be sent to the lower category. A list of all local players who are not part of HBLPSL 2020 will be released separately.