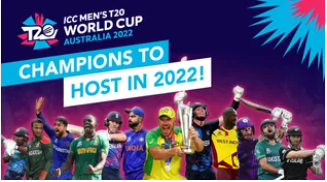 Final of T20 World Cup 2022 will be played at MCG. Semi-Finals  will be  hosted at the Sydney Cricket Ground and Adelaide Oval on November 9 and 10.

Namibia, Scotland, Sri Lanka and West Indies will play in Round 1.The four teams will qualify for Round 1 from two  global  qualifying tournament.

First qualifying tournament will be staged in Oman in February and 2nd in Zimbabwe in July.