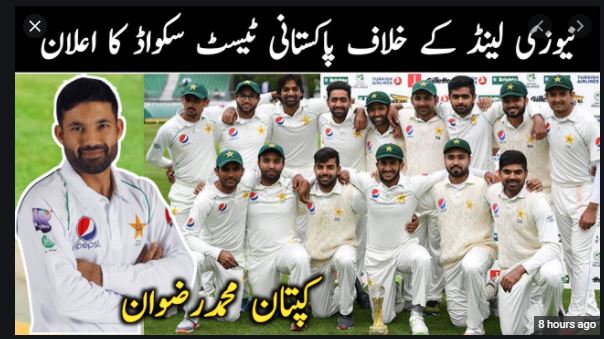 Pakistan vs New Zealand 1st Test – PAK Team Squad announced today. 17-men Team announced. Muhammad Rizwan will be Captain in Pak vs NZ 1st Test to be played on 26th December 2020. National cricket team captain Babar Azam and opener Imam-ul-Haq have been ruled out of the first Test against New Zealand starting on December 26 due to a thumb injury.

A 17-member national squad has been announced for the first Test against New Zealand. National team captain Babar Azam and opener Imam-ul-Haq are not available for the first Test due to a thumb injury, said Mohammad Rizwan, vice-captain of the squad due to unavailability of Babar Azam. He will lead the national cricket team in the Test match starting from Saturday. He will be the 33rd captain to lead Pakistan in the most important format of cricket.

The tour selection committee has included opener Imran Butt in the 17-member national Test squad. Imran Butt has been included in the national test squad for the first time.

Who is Imran Butt?

Imran butt is include in Team squad announced for first test against New Zealand. Balochistan cricket team opener Imran Butt had scored 191 runs in 3 matches of the ongoing Quaid-e-Azam Trophy first class tournament in the country before joining the team in New Zealand. The 24-year-old batsman had scored the most 934 runs in the Quaid-e-Azam Trophy last year. Imran Butt, who averaged more than 62 runs, scored 4 centuries and 3 half-centuries in the tournament.

It should be noted that Babar Azam’s right thumb and Imam-ul-Haq’s left thumb were fractured due to a ball hit during training in Queenstown last week. Both the players have not started net practice yet. He is examining the injuries of both the players while the decision to participate in the second Test match of both the players starting from January 3 in Christchurch will be taken in due course. Live Streaming Tv guide