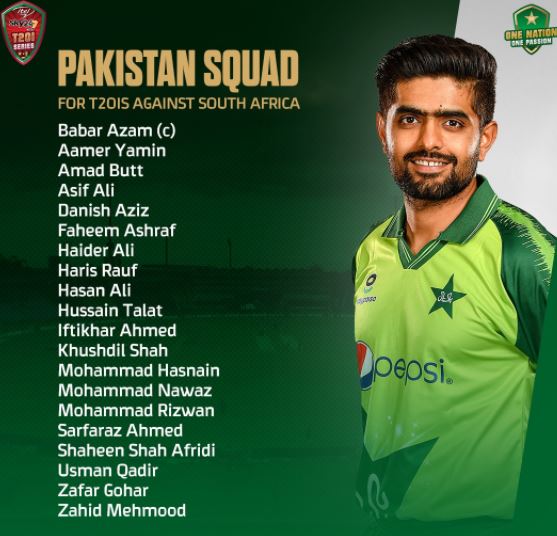 Pakistan vs South Africa 1st T20 to go Live today evening | After a clean sweep of the Proteas in the Test series, the Pakistan team is now determined to repeat the same performance in the T20. The first match will be played on Thursday at Gaddafi Stadium in Lahore.

The return of captain Babar Azam, who missed a single match due to injury in the tour of New Zealand, has boosted the morale of the Green Shirts. The struggling top order is also likely to find stability. Seriously, Haider Ali will be seriously tested as an opener. Began to consider.
Mohammad Hafeez, who did not join the bubble in time due to his participation in the T10 League, will not be available. The senior player who scored the most runs in T20 cricket among the batsmen around the world last year has been instrumental in Pakistan’s victories, in the middle order. They will be sorely missed.

Mohammad Rizwan, who is in good form in New Zealand, will try to fill the gap of Mohammad Hafeez by taking the burden of batting along with wicket keeping. Shadab Khan is not available due to injury. Khushdal Shah, Asif Ali and Hussain Talat are part of the batting line. Are strong candidates to become.

Shaheen Shah Afridi and Faheem Ashraf are likely to be rested. If Faheem is dropped, he will be replaced by Iftikhar Ahmed. Haris Rauf, Hassan Ali and Mohammad Hasnain are being considered for inclusion in the pace battery.

All-rounder Mohammad Nawaz and league spinner Usman Qadir, who was declared the best player in the series against Zimbabwe, are also planned to control the Proteas.

On the other hand, many of South Africa’s star cricketers have returned home after the Test series, including Quinton de Kock, Faf Duplessis, Rasi van der Dussen, Kagiso Rabada and Longi Ngidi.

In the current squad, only David Milan has the experience to play in Pakistani conditions. He came to Lahore in 2017 with the World XI. Acting captain Henry Klaassen will be looking to return to form after his release from Corona.

The squad also includes three cricketers awaiting their debuts. The last series between the two teams was played in South Africa in 2018-19 in which the Proteas took a 2-1 lead. Both the teams also completed the preparations by training yesterday. Shaped

The players continued their mission to hone their skills in batting, bowling and fielding. The team management also considered various possibilities for a possible playing XI. Preparations for the match have been completed at Gaddafi Stadium. Batsmen will have the opportunity to score openly on the supporting pitch, bowlers bowling on a good line and length can also be helped.

It may be recalled that 18 months ago at Gaddafi Stadium, the novice Sri Lankan team swept the green shirts and confirmed the decline in performance. After this series, Sarfraz Ahmed also had to lose his leadership. They won two matches against Bangladesh here in January last year, one match was marred by rain, and the Green Shirts are also in danger of being upset by the novice Proteas team.