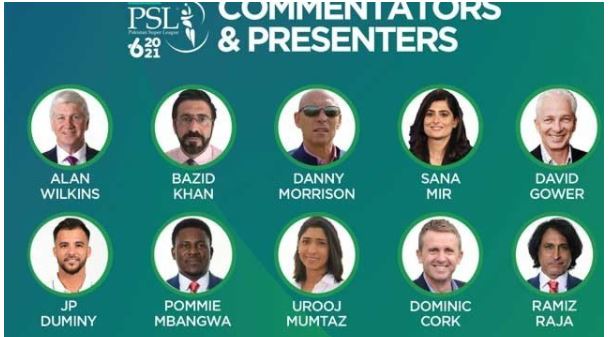 South Africa’s JP Dominy and Zimbabwe’s Pumi Ambengwa will also join the commentary panel in Lahore from March 10 to 22.

READ ALSO : PSL LIVE STREAMING TV CHANNELS 2021 | WHERE TO WATCH LIVE | Where to watch Highlights | Where to Get Tickets

The event will be co-produced by Blitz Advertising, Trans Group and NEP. More than 30 cameras will be used during the HD coverage of the event. Spider cam, buggy cam, Hawk Eye and DRS technology including super slow and ultra motion cameras will also be used. Kirk Wizka will be used for interesting statistics during this time. Weekly magazine shows, HBLPSL stories and special features will also be produced during the event.

“We have worked hard to further improve our production standards and I am pleased to be working with a consortium of NEPs, Blitz Advertising and Trans Group,” said the Director Commercial PCB. He said that he also welcomes these well-known commentators who are part of HBLPSL 2021.

Rao Umar Hashim Khan says that he congratulates the PCB on the successful production of the South Africa series, which was also made possible by a consortium of NEP, Blitz Advertising and Trans Group. He said that he would try to maintain high standard of production in HBL Pakistan Super League.

Saeed Azadi says that after South Africa series we are now ready for the best production of HBL Pakistan Super League, we will use state of the art technology here. He said that we are HBL PSL Ready to contribute to the successful organization of 6.

Ahsan Idrees says that this consortium will try to maintain high quality production in HBLPSL 2021, hopefully the fans will get the best coverage.