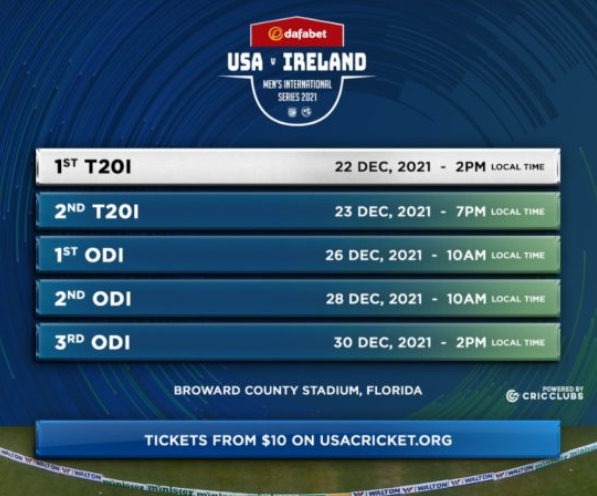 Ireland Cricket Team is on tour of USA for two T20I and three ODI. First  T20I  USA vs Ireland will be played on December 22, 2021 at Central Broward Regional Park Stadium Turf Ground, Lauderhill.

Ireland is ranked 13th in T20 Team ranking of ICC.

Barry McCarthy, George Dockrell, Harry Tector and Gareth Delany  all tested positive for COVID-19 during the pre-series testing and will join the team after 10-day isolation

For the USA, Karima Gore, Jaskaran Malhotra and Aaron Jones have been ruled out after being named in the initial squads..

four players have received their maiden national call-up, three of whom are U19 stars. Ritwik Behera has been named in both the ODI and T20I squads, while Yasir Mohammed and Ali Sheikh have been called up for the T20I squad along with Ryan Scott.

Rusty Theron too will be unavailable due to a groin injury

In the USA and North America: Willow TV will broadcast the series in the United States of America and other countries in North America.

In Ireland and the UK: FreeSports TV will broadcast the matches live . Viewers can watch the matches on Premier Sports 2 in Ireland live .

In India: The matches will also be broadcast on the digital platform in India. The league’s streaming partner in India is the FanCode app.

Ireland has more chances of win in 1st T20I vs USA.