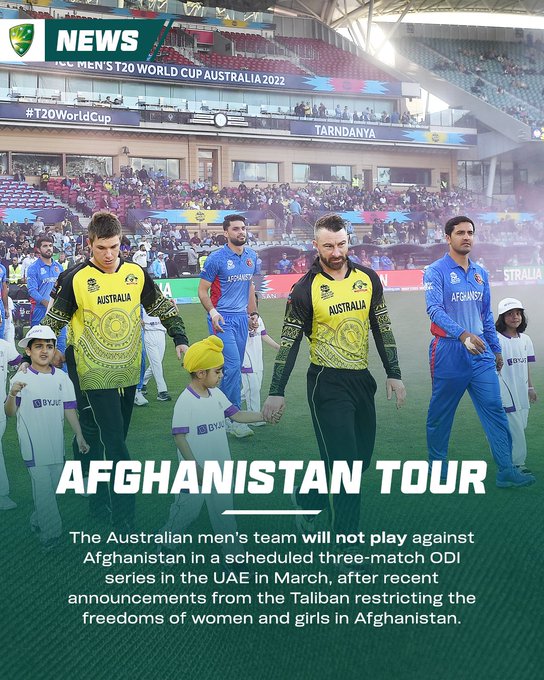 Australia’s scheduled three-match ODI series against Afghanistan in the United Arab Emirates in March has been canceled by Cricket Australia (CA) due to recent restrictions on women and girls’ education and employment put in place by the Taliban, who recently seized control of Afghanistan. After consulting with various stakeholders including the Australian Government, CA announced it would withdraw from the series and expressed its commitment to supporting the growth of cricket for both men and women in Afghanistan and its hope for improved conditions for women and girls in the country. The cancellation will not impact Australia’s automatic qualification for the ODI World Cup in India in October. However, the series will impact the ODI Super League points and awarded to Afghanistan.

In addition, the series cancellation has been a concern for Afghanistan Cricket Board and International Cricket Council (ICC), as Afghanistan currently remains the only ICC full member nation without a women’s team and will also be the only full member without a team at the inaugural Women’s U19 T20 World Cup. The ICC CEO, Geoff Allardice, has stated that the recent developments in Afghanistan were “concerning” and that it would be brought up at the next ICC meeting in March. The series also resulted in a forfeiture of 30 competition points for the ODI Super League for Australia, which is already secured its spot for the ODI World Cup in October. However, it will not be the last ODI for Australia before the World Cup, as they will play three ODIs in India, five in South Africa and three more in India, preceding the World Cup.

In conclusion, the recent political developments in Afghanistan have led Cricket Australia to cancel their scheduled ODI series against Afghanistan in March, citing restrictions on women and girls’ education and employment as the main reason. This decision has been supported by the Australian government and other stakeholders. The cancellation is also of concern to the ICC and Afghanistan Cricket Board, as it highlighted the lack of development of women’s cricket in Afghanistan. As a result, the series also impacted the ODI Super League points, which has been awarded to Afghanistan. Additionally, the series is a disappointment for cricket fans who were looking forward to the match-up and a lost opportunity for the players and teams to gain valuable experience on the field. Despite the series cancellation, Australia is still scheduled to play ODI matches in India and South Africa, before the ODI World Cup in October, where they have already secured their spot.