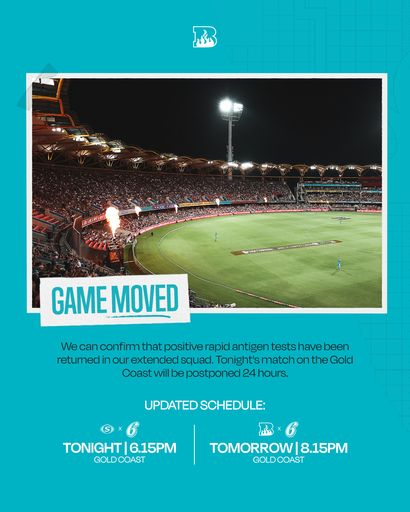 Brisbane Heat have announced changes in fixtures of BBL11. The Heat’s match against Sydney Sixers at the  Metricon Stadium, golad Coast  was set to take place on Tuesday, January 4, but it has now been postponed by 24 hours. Instead, the Scorchers will lock horns with the Sixers at the same venue on Tuesday.

The tickets for Tuesday’s match between Heat and the Sixers can be used on Wednesday, January 5. The Heat, led by Jimmy Peirson, are also scheduled to go to Melbourne to face the Melbourne Renegades at the Simonds Stadium in Geelong.

Terry Svenson, the chief executive officer of Queensland Cricket, in the meantime, thanked Cricket Australia for making the arrangements on a short notice.

“The health and safety of our players and coaches and support staff, and their families, is of paramount importance. By making a decisive call on tonight’s game, we can work as efficiently as possible to support those players who have returned a positive rapid antigen test and assist the replacement players coming into the squad,” Svenson was quoted as saying.

“It also means that fans who are attending the matches or were intending to do, can establish their options as soon as they are able,” he stated.

“We are providing all the support we can to players, staff and their families. I’d like to thank the medical and off-field teams at both Queensland Cricket and Cricket Australia for their ongoing guidance and support,” Svenson added.

The Heat are currently placed fifth in the points table with 14 points from eight matches. They will be going into their next game on the back of a 14-run win over the Hobart Hurricanes. The team has also won matches against Melbourne Renegades and Adelaide Strikers.