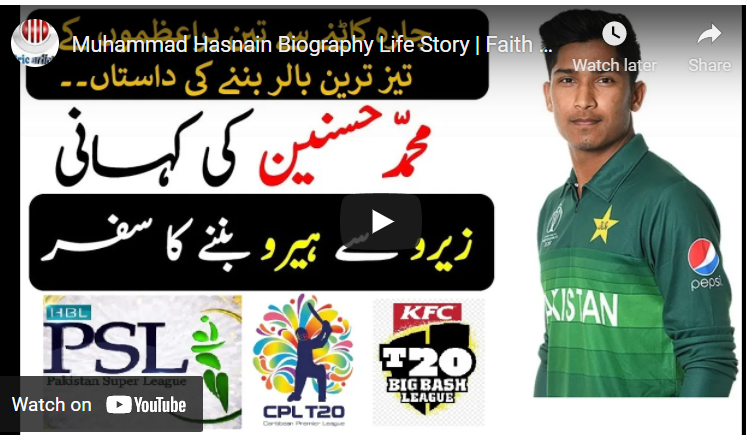 Will Muhammad Hasnain, the fastest bowler of PSL, CPL and Big Bash, be able to break Shoaib Akhtar’s record?

Just as Central Asia can be called the land of warriors, so Pakistan can be called the land of fast bowlers. Imran Khna emerged as a bowler when he took 12 wickets and Pakistan’s  got first victory on Australian soil. After Imran Khan, the duo of Wasim Akram and Waqar Younis led Pakistan to many victories. In the form of Shoaib Akhtar, Pakistan got the fastest bowler in the world. Unfortunately, some fast bowlers could not get a prominent position. In which Muhammad Zahid’s name is very prominent. Mohammad Asif and Mohammad Amir were more swing bowlers than speed. After 2015, Pakistan had three Young fast bowlers at the same time, including Shaheen Shah Afridi, Naseem Shah and Mohammad Hasnain. Fourth Bowler Haris Rauf is some years senior than Trio.

Muhammad Hasnain hails from Hyderabad. He hails from Kali Mori, an ancient mohallah  of Hyderabad. No body knows that a boy from Kali Mori  will  overshadow all batsman of that age.. He was born on April 5, 2000. Mohammad Hussain’s father Mohammad Hussain himself was   club cricketer of his time. He used to cut and sell fodder with a toka machine in Hyderabad. Muhammad Hasnain was a very good tape ball player at the age of twelve. One day her father saw his match. The ball was in Hasnain’s hands and the hearts of the batsmen were out of thier control due to his speed. The first three balls were dot balls and the last three balls were three wickets. The father had found the meaning of his unfulfilled dream. He made up his mind that day that selling fodder would not be his first priority, but that protecting the future of his youngest child would be his first priority. Muhammad Hasnain was admitted to the cricket club. Muhammad Hasnain has been selected in Hyderabad U-16 and from here Muhammad Hasnain wass  selected in Pakistan U-16. Muhammad Hasnain toured Australia in 2015 with the Under-16s. Shahin Afridi also accompanied Hasnain on this visit. One day, the great Australian player Steve Waugh came with his son Austin to watch the match at Bradman Ground near Sydney and saw Afridi and Hasnain bowling. Steve Waugh had said on the same day that these two boys would prove their mettle in international cricket.

Hasnain was part of the Pakistan team in the 2016 Under-19 Asia Cup in Sri Lanka where he played only one match.

Muhammad Hasnain played his first T20 match on February 17, 2019 against Lahore Qalandar in Dubai and took one wicket for 29 runs in 4 overs.

In the first match, Hasnain did not have any significant success but he had already surprised everyone by bowling at a speed of 151 kmph in the first match. It was the fastest ball in the history of PSL.

In the final, Hasnain took three wickets against Peshawar Zalmi. For this performance, Muhammad Hasnain was awarded Man of the Match award. Hasnain took 12 wickets in 7 matches.

He got the opportunity to represent Pakistan on March 24, 2019 and played his first ODI against Australia. Nine overs 54 runs no wicket. Finch, who scored a century and won the Player of the Match award, was badly disturbed  by Muhammad Hasnain. He hit the bouncer and broke his helmet.

The first T20 match  of Hasnain career was played against England in Cardiff on 5 May 2019. 29 runs did not get any wicket. It was a high scoring match and Hasnain gave the lowest number of runs among  fast bowlers. Muhammad Hasnain was  signed for Caribbean League   and the team was Trinbago Knight Rider.

In Caribbean League 2019 for  Trinbago Knight Rider’s Muhammad Hasnain took 6 wickets in 4 matches. And  bowled the Caribbean League’s fastest ball with a speed of 156 kmph. In the Big Bash League 2021-22, England fast bowler Saqib  Mahmood was playing for the Sydney Thunder. When Kashif had to go to the England team, the Sydney Thunder Signed Mohammad Hasnain in place of Saqib  Mahmood. Mohammad Hasnain became the first bowler to take three wickets in the first match of the Big Bash League.

His action was challenged in Australia. Now the test will be in Lahore whether Muhammad Hasnain will be able to play cricket or not.

He will play for Quetta Gladiators in PS7 starting January 27, 2022.