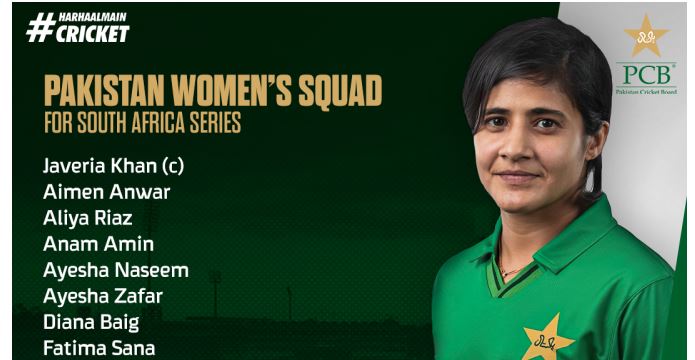 Javeria Khan will be the Captain of the Pakistan Women cricket team in South Africa tour. Bismah Maroof will be vice captain.

Ayesha Zafar, Kainat Imtiaz, Nahida Khan and Nashra Sandhu return to the women’s national team for the tour in which they will play the hosts in three ODIs and as many T20Is.

All-rounder Kainat Imtiaz was awarded player of the tournament award as she scored 111 runs from four outings, getting dismissed once, and took three wickets, while left-arm spinner Nashra Sandhu finished as the joint leading wicket-taker in the tournament with four wickets at 25.

After the second one-dayer at the same venue on 23 January, they will move to Pietermaritzburg where they will play the third ODI on 26 January and first two T20Is on 29 and 31 January.

For the last T20I on 3 February, which will also be the last match of the tour, the team will return to Durban.

The 17-player squad will continue to prepare for the tour in the bio-secure environment, which was set up on 20 December for the probables camp, in Karachi before their departure on 11 January.