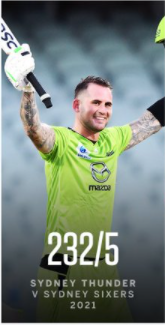 The highest score   by any team in BBL is 223.8  scored by Hobart Hurricanes vs Melbourne Renegades on  12 January 2017.