Nominee for ICC Men’s Cricketer of the Year  Awards 2022 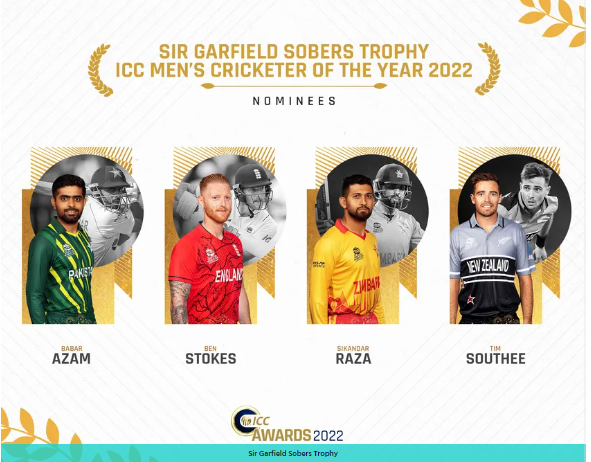 Nominee for ICC Men’s Cricketer of the Year  Awards 2022

The four nominees for the Sir Garfield Sobers Trophy for the ICC Men’s Cricketer of the Year  2022 are Babar Azam,Ben Stoakes,Sakindar Raza  and Tim Southee.

Babar Azam was   winner of The 2021 ICC Men’s ODI Player of the Year Award.

He has scored 679 runs in nine matches. He scored 8 fifties in ODI .He won all three ODI series. He won 8 out 9 ODI.He accumulated 1184 runs in just nine matches in Test format. In the T20I format, he led Pakistan to their first T20 World Cup Final since 2009.

Stokes has  won  nine of the 10 Tests as captain.  He has scored 870 runs, including two centuries and picked up 26 wickets.

In T20Is, Raza struck at an incredible strike rate of over 150 to accumulate his 745 runs. He was also the highest wicket-taker for in the shortest format, scalping 25 while giving away just 6.13 an over.

.Southee was the highest wicket-taker for his country with 28 wickets in eight matches.

The 34-year-old was particularly lethal in the white-ball formats and the New Zealand team that went through to the semi-final of the ICC Men’s T20 World Cup took  seven wickets in five matches at  economy rate of 6.57.