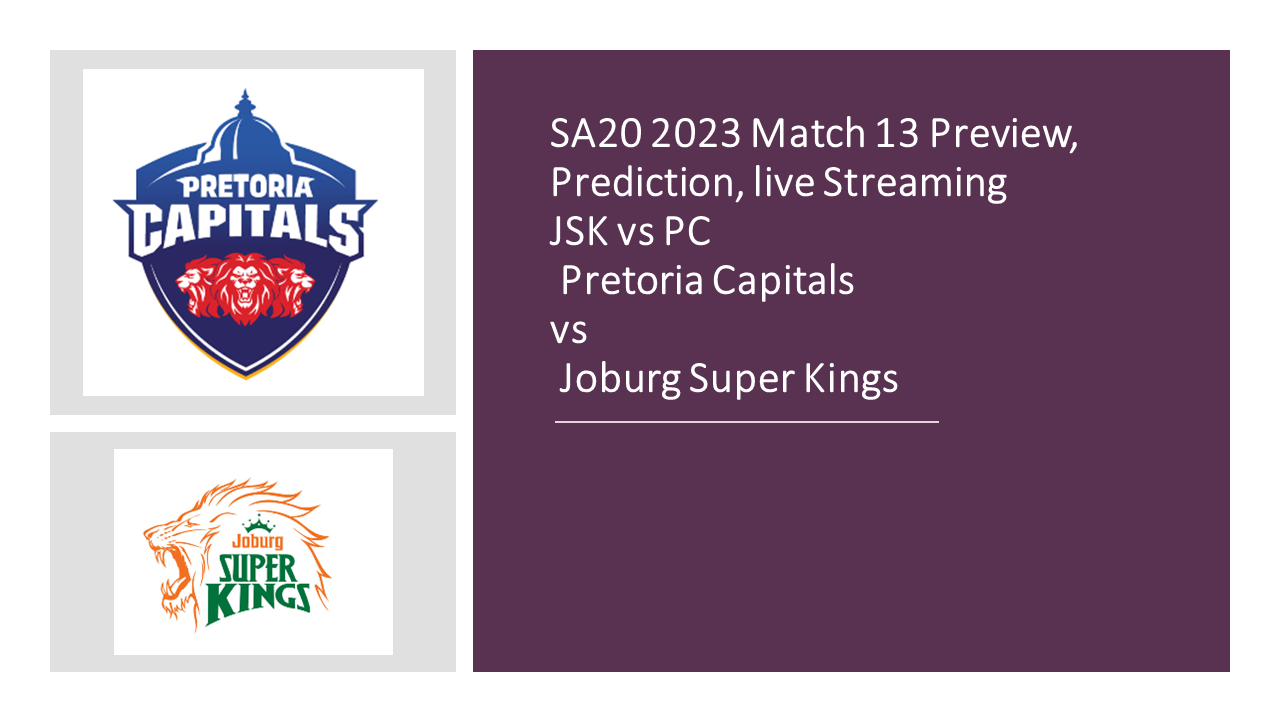 he Pretoria Capitals will face off against the Joburg Super Kings in the 13th match of the SA20 2023 tournament at SuperSport Park in Centurion on Wednesday, January 18th. The Super Kings secured a thrilling six-run victory in their last encounter with the Capitals on Tuesday. Leus du Plooy, an uncapped English batter, scored an impressive 75* off 40 balls, while Reeza Hendricks contributed 45 off 50 to help the Super Kings post a total of 168/6. Eathan Bosch, a young bowling all-rounder, took 3 wickets, and star pacer Anrich Nortje took 2 for the Capitals. In their chase for 169 runs, the Capitals got off to a fast start with Phil Salt and Will Jacks scoring big knocks, but the Super Kings’ star West Indies batter Alzarri Joseph took 2 back-to-back wickets to give the Super Kings the edge. Salt top-scored with 29 off 15, and James Neesham added 24 runs, but the Capitals fell 6 runs short. Veteran left-arm spinner Aaron Phangiso took 4 wickets, and Alzarri and Romario Shepherd took 2 each for the Super Kings.

The likely top batter for the Pretoria Capitals is Phil Salt. The 26-year-old rising English talent had a strong start in the recent match against the Super Kings, scoring 29 runs at a striking rate of 193.3, but was unable to convert it into a significant innings. However, Salt had previously smashed 77* off 47 in the Capitals’ opening match against the Sunrisers Eastern Cape and currently leads the scoring chart for the Capitals with 107 runs from three innings at a striking rate of 167.18.

Anrich Nortje, the South African speedster, continues to impress with his strong performance, taking two crucial wickets in the last game against Faf du Plessis and Reeza Hendricks. In the Capitals’ opening game, he delivered a match-winning spell with two wickets and currently leads the team’s bowling chart with five wickets and an economy rate of 6.75.